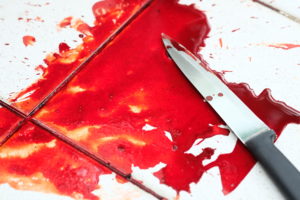 Arriving on the Scene

Knife wounds are commonly caused by knife crime, but occasionally can be caused accidentally. When arriving on the scene of knife crime, your safety must be top priority. If somebody has been stabbed, where is the person who actually stabbed them? Make sure that they are nowhere nearby and it is safe before you approach the victim.

The next thing to look at are the signs and symptoms – what you can see. What does the patient look like? How is the patient breathing? What position are you in? Also, is there any blood loss? Is the wound gushing blood or is the wound sealed? How much blood has been lost? How severe is it? Where is the knife? Is it in the chest, is it in the leg, is it in the arm? All of this is essential information, and knowing it could be the difference between life and death. There may be vital organs behind the knife and you need to know what has potentially been damaged. As a First Aider, it is essential that you know basic anatomy. This is so that if, for example, there is a stab wound, you know what organs may have been affected.

Another important one is, was it a male or a female that stabbed the person? Women tend to stab downwards and men tend to stab upwards. This is just a freak of nature but it does tend to be a fact. Men tend to stab with more force than women as well, so it tends to penetrate deeper. These are all “tends” so be aware that this will not always be the case. Always check the body for more than one stab wound. Were they stabbed in the back and they are lying on the back and you have missed it?

Dealing with the Wound

Remember, never pull any object that is penetrating the body out of the body. So if there is a knife that is penetrating the body, it stays in until you can get them to professional clinical care. The way to deal with it is by putting a dressing on either side of the blade and wound, and apply direct pressure onto these dressings. This stabilises the blade so it is immobilised, meaning the blade cannot create any more internal injuries.

If the knife is not still in the body, stopping the bleeding should be the number one concern. Preferably using dressings from a First Aid Kit, or even more preferably, Trauma Dressings, apply direct pressure over the wound. Then wrap the dressing around the wound. Should blood start to seep through the first dressing, apply a second one over the top of the first dressing – without removing it.

It doesn’t always have to be a knife or a blade. Similar things also occurs during RTC’s with pieces of metal/fragments of the car and other similar situations. When anything can penetrate the body and is sharp enough to penetrate through the surface of the skin, it has to be treated exactly the same. So don’t get distracted by it not being a knife. Whatever has gone in and exited the body, or has gone in and stayed into the body has to be dealt with in exactly the same way as with a knife blade.

Here at ProTrainings, we offer a FREE Knife Crime First Aid Course. Follow the link to get your qualification!