The main benefit of cling film is that it won’t stick to the burned area. If you were to put a normal dressing on a burn, it would stick. This creates problems, as it is going to pull the already wounded skin away. This is not only going to be extremely painful but will also cause increased scarring. Cling film however, does not stick to the burn. Now, you can use normal cling film but it is possible to get special burn film which is quite expensive. Remember, always have your gloves on with anything to do with first aid and burns. 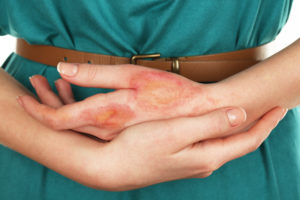 The first thing you want to do is to get rid of the first part of the film on the roll. You do not want to have any surface that’s likely to be harbouring bacteria, increasing the risk of infection. What you don’t want to do is just wrap cling film around the affected area, because sometimes with burns, the affected area swells. If this happens and the cling film is wrapped too tightly, it is actually going to constrict the burn and increase the pain. So what we do is open up the cling film in panels and lay it, panel by panel, over the burn. 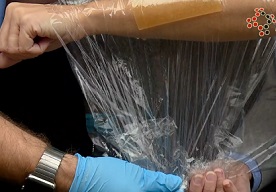 Then use the excess of cling film on either side and seal it off as seen in the photo to the right. You can always ask your patient to help you if possible, or a bystander.

What you should then do is apply layers of cling film over the burn to protect it from further damage. Again you should not actually wrap it tightly around. Once you have applied multiple layers, cut off the cling film and make sure it is properly gripping together.

You can leave it like that if you wanted to, but an easier way is to cut a ‘V’ out of the excess cling film. Twist either side around so the excess is bunched together, either side of the burn. This keeps the cling film secure. Should the arm start to swell, it gives you an easy way to loosen or remove the cling film if needed.

To hold that in place, you can use a standard bandage. What you need to do it to apply the bandage very loosely on either side of the burn. If you wrapped up the burn as well, it would put it under pressure causing the patient a lot of pain. Make sure that nothing touches the cling film now, especially on the site of the burn. You should leave this in place until either the paramedics arrive, or the patient arrives at the hospital.