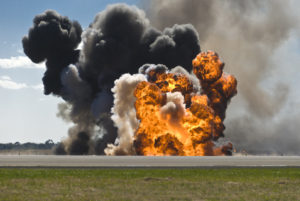 Blast injuries are much more common than you may think. They can come from many different places – not just bomb explosions. They can also arise from house fires, in-cylinder fires or basically when anything explodes. When assessing how bad an explosion has been, there are a few factors that need to be considered: how far away the explosion was, what was involved, how many people were involved and how severe the blast waves itself were. All of these will impact what injuries nearby people may have sustained. This is because, in an explosion, there are primary, secondary and tertiary waves. When dealing with blast injuries, it will probably not solely be burns that you are dealing with.

So the first thing that affects anybody will be the initial blast wave itself. As an explosion occurs, a wave is sent out from the central point – the epicentre. That wave can be severe enough to not only rupture eardrums, but peoples’ livers and kidneys as well. It can also do severe damage to your lungs, and in severe occasions, this actually can be fatal.

The next thing is the secondary wave. The secondary wave tends to be the rubble, shrapnel, metal or other particles that the blast wave throws out. Debris will come flying through the air, sometimes 1000 miles an hour and will hit at full speed. Here is where the most obvious trauma and injuries are sustained. Common injuries sustained from this wave include serious bleeds and amputations.

And finally, there is the tertiary shock wave. The tertiary shockwave actually hits the victim from behind. This means that two waves hit from the front as the blast wave leaves the epicentre, and one from the rear. This happens because it creates a vacuum when it leaves the epicentre. A vacuum is an area of space entirely devoid of matter, meaning not even air occupies this space. The universe acts in a way which wants this space filled. Consequently, air and other particles rush back in to fill up the vacuum at high speed. As this hits the victim, it can do damage to the liver, kidneys and lungs in particular. 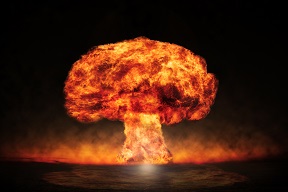 In situations like this, the lungs could either burst due to overpressure, or the lungs will be entirely drained of air. In explosions, it is this third and final wave which causes “mushroom clouds” to form. As all of the particles rush back to the centre, they then go up into the air as if in a tube. Finally, the particles then cascade over the top like a mushroom.

Each of the three waves can be enough to kill you. Of course, this is all dependant on the size of the explosion. Even if the explosion is not huge, if you put them all together, it can put the body through a massive amount of trauma. In blast injuries, you must remember that not all trauma sustained will be obvious, as the separate waves can do damage to internal organs. Your eyesight, ears and internal organs can be very, very difficult to manage, since not only can we not see what the problems are without proper medical help, but there may be damages to multiple organs. Normally, the people who were the nearest the epicentre of the blast will have sustained the worst injuries. Consequently, these should be dealt with first. However, shrapnel can travel great distances and someone far away may have suffered a very bad injury. In this day and age, it is reasonable to remember that blast sizes can sometimes be great enough to do serious damage at least two or three miles away, especially if there is nothing there to protect you.