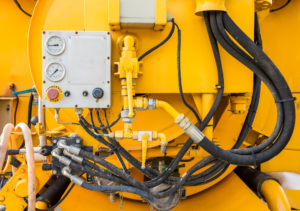 Here is a real story about a High-Pressure Injection Injury. It takes place in a factory which used high powered hydraulic equipment:

“A gentleman, one of the maintenance workers there, felt as though he had his hand stung whilst reaching inside a machine. As a result of this, he sucked his finger and did nothing else about it. That gentleman, later, lost his finger. In fact, he lost two fingers. People that he worked with kept asking, “What could we have done?” In that situation, the answer is recognising that something had happened. It is important not to ignore something that may appear very minor. The stinging sensation that that man felt was the injection of a very high-pressure hydraulic fluid through his skin and into his hand. The consequences of that were he lost two fingers. This will have a dramatic effect on how he lives his life from now on. In fact, he is no longer a maintenance engineer.”

The skin, which is the largest organ of the body, is actually very porous. It is very soft, very vascular, and is actually fluid. So anything that is injected into the skin at high pressure, will immediately penetrate through the skin. This destroys the soft tissues, blood vessels and any nerves near to those blood vessels. It is almost like an invisible liquid bullet. You cannot see immediately, other than maybe a tiny red spot. However, when that fluid enters into the subcutaneous fat, beyond the dermis, there are two major problems here.

The first problem is that it is space-occupying, and the second problem is that it is a poisonous substance to the body. In the case of hydraulic fluid, it is very hygroscopic. This means it attracts water towards itself. This has the effect of further increasing the space-occupying lesion. Couple this with the body’s natural inflammatory response, and you can see how quickly the swelling will start to cause damage.

The hand and the forearm are very compartmentalised already, in terms of fascia and muscle tissue. This means it is very easy for the pressure inside these compartments to build up, compromising blood flow both in and out of the affected area. It can occur as quickly as one or two minutes after the initial injury. You may want to know though, that it can take a few hours to start showing any signs of being damaged. The first sign you or the patient will notice is that it starts to become hot, inflamed and painful. Perhaps, as in the above case, the man took two Paracetamol and two Nurofen and hoped that the pain would go away. This patient should have gone immediately to the local A&E department with a full description of what had happened. Like many things such as cancer, early diagnosis and treatment is key. When he took the pills, doctors could have done something which would mean he would not have lost two fingers.

Treatment involves surgical intervention to debride the wound, removing the poisonous substance.  Consequently, the swelling could continue without causing compartment syndrome. Had that happened to the above man, the outcome would have been very different. As it stands, he is now without two fingers and unable to do his normal job.

The moral of the story is to be aware of the hazards that are around you when working in an industrial environment. It is impossible to know every day and during every situation. When you are repetitively working with high-pressure fluids, hot fluids and chemicals, you should be fully aware of the potential hazards that can occur. However, it is maybe even more important to know what to do when they do occur.