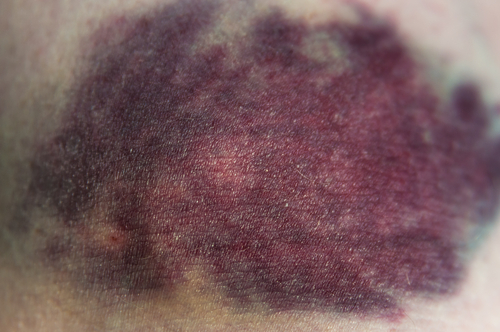 Internal bleeds are very serious as the casualty is still technically losing blood, even if it is still technically inside their body. Internal bleeding is often very hard to detect, as no blood can be seen leaving the body. Instead, it pools inside the body, building up over time. The bleeding can occur around organs, from organs, or even inside of organs themselves. An example of this could be blood building up in the lungs, called a haemothorax.

The main cause of internal bleeding is from trauma. This may have been something like a car crash or from being hit by something. Sometimes it is just the blood vessels which are affected, causing the bleeding. However, some cases may see organs themselves becoming damaged and causing blood loss. Some organs can burst (e.g. stomach and bladder), whilst others tear (e.g. the liver).

Internal bleeding doesn’t always occur because of trauma, but it could also happen because of other things, such as pregnancy, excessive alcohol, or they may even occur spontaneously.

The symptoms of an internal bleed can be very varied depending on where the bleed is building up. Normally, the patient will have quite a lot of pain around the area. They may also have an unusually low blood pressure. There may also be abnormal bulging of the area. This would be due to the blood building up so much that it is stretching the skin.

Internal bleeding is a medical emergency, so the Emergency Medical Services must be called immediately.

For more information on training courses, visit our “Courses” page which also includes our First Responder and First Person on Scene (FPOS) Courses. If you have any queries, don’t hesitate to contact us via our website or call us on 01206 805359.