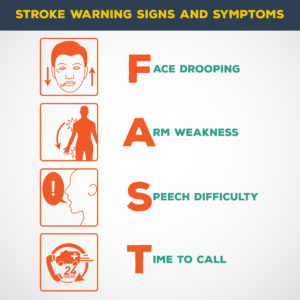 A stroke can occur when a blood vessel in the brain becomes blocked or ruptured. This means parts of the brain become starved of oxygen. This is very serious, as your body constantly needs oxygen, especially the brain. If you suspect a stroke, you must call the emergency medical services immediately.

An estimated 150,000 people have a stroke in the UK each year, and over 10,000 of these people are under retirement age. Stroke has greater disability impact than any other chronic disease, and over 300,000 people are living with moderate to severe disabilities as a result of a stroke. Strokes can kill, and there are over 67,000 deaths due to stroke each year in the UK. Strokes are the third most common cause of death in England and Wales after heart disease and cancer. Stroke accounts for 9% of all deaths in men and 13% of all deaths in women.

Sometimes blockages in the blood supply to the brain are temporary. This means and a person will have symptoms of a stroke, but only for a short space in time. This is called a transient ischemic attack, or TIA. It is also known as a mini-stroke. Some people have just one TIA. Others have repeated TIAs over their life. A TIA is a sign that part of the brain is not getting enough blood and there is a risk of more serious strokes in future. As with major strokes, you must seek emergency medical treatment immediately. A stroke can happen with no obvious cause to people of any age, but there are factors known to increase the likelihood of it happening. Some of these factors are things that can’t be changed. Other risks may be reduced by lifestyle changes or medication.

A good mnemonic to use is FAST.

The first signs that someone has had a stroke are very sudden. The more quickly you identify that someone is having a stroke and the sooner they receive medical treatment, the more of the brain that can be saved, allowing the patient to have a much better chance of recovery.

Caring for a Stroke Patient

The care you give the patient is to help them onto the floor and place them in the recovery position on their affected side. Cover them with a blanket, calm them down and try to keep people away. They’ll be confused and scared, so try and avoid having onlookers. Losing bladder or bowel control is common, so protect their dignity at all times. Dealing with someone who is having a stroke can be very upsetting for the first-aider as well. Be aware of this and talk with a friend or medical professional if you need any help.