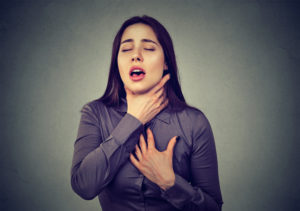 During an emergency situation, the timely resolution of the most life-threatening cause is paramount and choking is certainly one of those instances. Hence, the damage caused by the use of aggressive and forceful compressions, thrusts, and back blows warrant the collateral damage from these interventions. Any injuries sustained are irrelevant if the person is dead. It is better to prevent death and sustain injury, as the injury is treatable but death is irreversible.

While thousands of lives have been saved due to the Heimlich manoeuvre (abdominal thrusts) since its introduction in 1975, one thing that becomes apparent after a review of the reports is the number of injuries and trauma caused by choking First Aid. Properly performing abdominal thrusts has a direct effect on the incidence and severity of collateral trauma.

Multiple research groups have done extensive research into the topic of post-abdominal thrust trauma or any choking emergency treatment performed. It is recommended to seek further medical evaluation immediately to ensure that there are no collateral injuries. This applies especially to those over age 65, as most injuries occurred in this population group.

While complications are typically low, one of the more common injury is a gastric or stomach rupture. If not dealt with quickly, it can have a high mortality rate. Contributing factors include individuals being over 65 years of age, or the ingestion of large amounts of food and alcohol. A case study of two individuals experiencing stomach rupture said that the improper use of abdominal thrusts was a significant cause. Therefore it is essential that you have proper training before carrying it out. Children are also at a higher risk of choking trauma. This is because the bone and organ structure of a child will not be fully developed. This means they are at a higher risk of damage when receiving chest thrusts.

However, it is not only the person choking who is at risk of choking trauma. One case study saw a first responder tear a rotator cuff when performing abdominal thrusts.