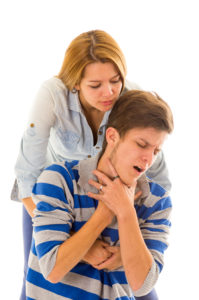 One first aid skill that you may well have to use at both work and home is dealing with someone who is choking. Choking is a life-threatening problem and can involve basic airway management. In Wales and England, in 2016, over 250 deaths were reported from choking alone. Over 60% of these cases occurred whilst a patient was in hospital. Since 1987, there has been at least 20 deaths which have been caused by the accidental inhalation of asthma inhaler parts. London, in 2016 alone, saw around 2000 calls to the emergency services which involved choking. Not only did these calls tend to increase as the patients’ age increased, but they also happened to increase around meal times as well.

A partial airway obstruction could be a small piece of food, such as a fishbone, lodged in someone’s throat. It could be something they have just fully choked on and is now not completely blocking the airway, but is still stuck in their throat. If this was the case, they would be very uncomfortable, finding it hard to breathe and therefore getting fairly distressed. Keep encouraging and allowing them to cough to try and clear the obstruction. If someone is coughing and it is just a smaller obstruction, you probably would not have to get them to see a medical professional. After the obstruction has been removed, it may have caused some internal damage. Consequently, if the person was in pain after it had been removed, or they started to cough up blood, it is advised to take them to the hospital just in case.

A total airway obstruction is where the airway is completely blocked. This means that the patient cannot breathe, and can be fatal within minutes if not cleared. The first thing you need to do is to ask them the direct and simple question, “Are you choking?” The reason you ask them this is to see whether there’s any air going in and out of their throat. If they say “yes,” or they can breathe or cough, let them cough, as this would not be a total airway obstruction. They may have their hands around their throat, which is actually the universal sign of choking. Move any chairs or any sharp objects out of the way safely and quickly. This ensures that neither you nor the patients will be harmed whilst you are helping them. Then, deliver five back blows followed by five abdominal thrusts.

To do the back blows, stand them up, stand behind them and put your arm around their waist. Lean them forward slightly and, using your open hand, hit quite firmly between the shoulder blades. Each time you deliver a back blow, check to see if anything comes out. If after 5 back blows, nothing has come out, do five abdominal thrusts. 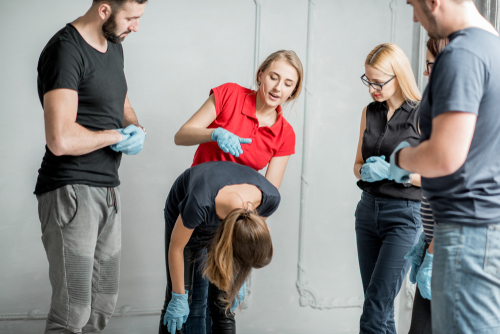 To do these, you need to put the thumb side of your fist just above their belly button. Then you bring your other hand around on top of your fist and give a sharp thrust action inward and upward. Again, check each time to see if anything comes out. If that hasn’t worked we go back, and we can then deliver another five back blows followed by five abdominal thrusts. But if the obstruction will not be cleared by either motion, then this person is going to become unconscious soon. Keep trying to remove it until they become unconscious, and alert the EMS if they do.

If they do start to become unconscious, you may feel them stumble go limp. Essentially, they will start to fall to the floor. If you can, help them to the floor but don’t hurt yourself in doing so. Once they are lying on the floor you need to get them onto their back start CPR at the chest compression stages. Once you have delivered 30 chest compressions, go on to deliver two breaths. Carry on this cycle until the obstruction is cleared and they become conscious, or until the emergency services have arrived.

The reason you do chest compressions is to force trapped air in the lungs against the obstruction. So by pushing down on the chest, hopefully, it will force the obstruction upwards and allow it to come out. The reason you do breaths is to try and get fresh air into the lungs. What could happen is you force the air around the side of the obstruction, getting more air into the lungs. This means that with the next compression, there is more pressure forcing the obstruction out. This also means that there is more oxygen getting into the body. When you started CPR, the heart would definitely be beating. After a few minutes, the heart will stop beating unless the airway is not cleared. However, now it is a very serious situation that you are dealing with. Make sure that the EMS are on their way should this happen.

If you look into their throat and see the obstruction, you can try to get it out. Turn them onto their side and carefully remove it with your fingers. However, do not “blind flick”, as this may end up with you pushing the obstruction back down their throat. If you cannot get it out, it may be that this person is now simply unconscious but can now breathe. If they are like this, leave them there and let the emergency medical professionals deal with it when they arrive.