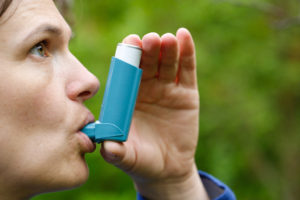 Asthma is a common life-threatening condition and its severity is often not recognised. It is a medical condition characterised by intermittent, reversible airway obstructions called asthma attacks.

Asthma is a condition that affects the airway – the small tubes that carry air in and out of the lungs. When a person with asthma comes into contact with something that irritates their airways (an asthma trigger), the muscles around the walls of the airways tighten. This causes the tubes to become narrower and the lining of the airway becomes inflamed, causing swelling. Sometimes sticky mucus or phlegm builds up and can further narrow the airways. All of these reactions cause the airway to become irritated and narrower – making it difficult to breathe. Therefore leading to symptoms of asthma.

A Moderate Asthma Attack would normally present the following symptoms:

Where asthma is classified as severe, the patient will need professional help as they will need to be given a nebuliser and steroids. Life-threatening Asthma has the following signs and symptoms:

If you see any of these, call the Emergency Medical Services as soon as possible.

There are different medications for the treatment and management of Asthma. Sometimes, no matter how careful they are about taking their medicine and avoiding triggers, they may have an asthma attack. When someone has an asthma attack it can be very frightening for the patient and they may have their own way of dealing with the attack. Sometimes all you can really do is to get their inhaler for them and reassure them. If you interfere too much they may seem angry but they are fighting to breathe and the last thing they need is a first aider telling them what to do when they already know.

When an Asthma Attack Occurs

If it is the first time someone is having what you think is an asthma attack, get them to a doctor or hospital as soon as possible as you will not have medications and therefore you cannot treat it. Some people may not have their inhalers on them, and there are certain things you can do if this is the case. The following guidelines are suitable for both children and adults and are the recommended steps to follow in an asthma attack.

As a first aider, you should encourage the patient to use the inhaler, you do not usually do it for them. Try and find a history of the patient in relation to the previous 6 to 48 hours prior to the attack. This information may be of help to the paramedics if things get worse.

If they are admitted to hospital or an accident and emergency department because of their asthma, make sure they take details of their medicines with them. This allows the doctors to know what has been prescribed and what has been taken. In most cases, the inhaler will deal with the attack and they will soon start feeling better. However, if you do not see signs of improvement or if they get worse, call the emergency medical services as soon as possible. Even if the patient says they do not want to make a fuss, it is better to be seen by a doctor to ensure they are ok and do not need further care.

If you were looking after someone’s child and they had an asthma attack while in your care, make sure you tell them. You will need to record any case of asthma that you treat in an accident book or in work records should one occur at work.

Have a look at our “Asthma Awareness” Course we offer throughout the U.K.