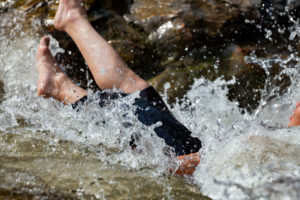 What to Do if Someone is Drowning

If you find someone submerged in water, immediately remove them from the water. However, as always with First Aid, ensure that you keep yourself safe.  Place them on their back and check for breathing. If they are breathing, place them in the recovery position and call the Emergency Medical Services. If they are not breathing, start CPR. However, because they have become unconscious due to being underwater, you start with 5 rescue breaths before you start any chest compressions. This gets lots of oxygen into their circulatory system.

People that do not lose consciousness but may have ingested a large amount of water should still be assessed by a doctor. They may be suffering from secondary drowning so it is always best to get them checked out.  Lung injury and potentially life-threatening electrolyte disturbances may occur from aspiration or ingestion of large amounts of water. This happens when the airway opens up. In doing so, water enters into the lungs where it builds up causing a condition called Pulmonary Edema. This causes breathing difficulties.

Symptoms of secondary drowning generally start within 24 hours of the incident. Symptoms include:

If you have oxygen available it should be given to keep their oxygen levels at the required level.